Texaco knows that your sports club is cash-strapped. So the company wants to give Irish sports clubs €130,000 to spend through its ‘Texaco Support for Sport’ initiative, fronted by former rugby star Donnaca O’Callaghan. In return, Texaco hopes you will ‘like’ the company for its generosity.

Texaco knows that sports is a healthy lifestyle choice. Sport is about inclusiveness, community, and camaraderie. Sport is a happy, joyful, and healthful activity. Please don’t allow Texaco to taint your sports club with money that Texaco owes to community groups in the Ecuadorian Amazon. The €130,000 Texaco is offering clubs across Ireland is a drop in the barrel compared to what the company owes the people of the Lago Agrio region of Ecuador, where courts found it dumped billions of gallons of toxic oil waste onto Indigenous ancestral lands.

“The oil companies came to these pristine forests, backed by our own government. They took what they wanted and wiped-out cultures, completely disregarded the Indigenous people, killed animals and ruined sacred places. In the end, the people couldn’t do anything about it because they couldn’t speak the language of the people destroying their lives! The same destruction is still going on to this day.”
Nina Gualinga, Indigenous campaigner form Ecuador. 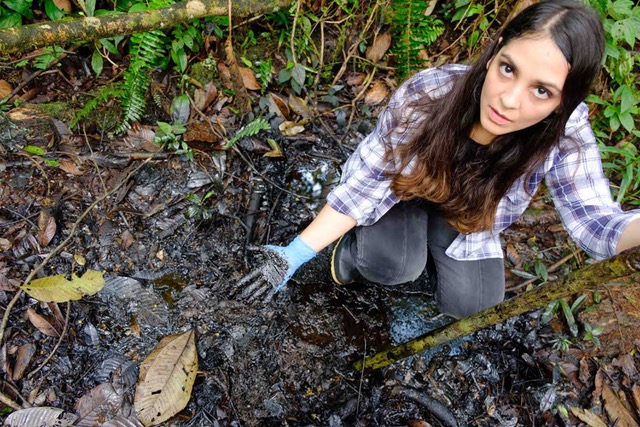 Ask yourself why does Texaco want to give your sports club money? They want you to think they are a good community corporation with your best interest at heart. The opposite is actually closer to the truth. Irresponsible businesses, including fossil fuel companies like Texaco, are driving catastrophic climate change as well as the destruction of climate-critical tropical forests, and the communities and biodiversity that rely on them.

“I fully acknowledge and support the great humanitarian work Donnaca O’Callaghan does on behalf of UNICEF Ireland as their Ambassador. But I urgently ask him to withdraw as the Texaco Sports Ambassador in light of Chevron-Texaco’s human and environmental rights abuses perpetrated against the indigenous communities in Ecuador's rainforest”, said Rex Wyler, Co-founder GREENPEACE International

In its relentless pursuit of profits, Chevron-Texaco have left a trail of devastation in the wake of its Ecuador operations, which lasted from 1964 to 1992. The company has refused to acknowledge the judgement made against it by an Ecuadorian court which ruled against Chevron and ordered the company to pay $9.5 billion in compensation to indigenous communities affected by their operations in the Amazon. Their actions fly in the face of Ireland’s potential, as global leaders through it’s ‘Green New Deal’ in keeping fossil fuels in the ground. Also, it is important to note that Irish taxpayers are very proud, and rightly so, of their massive financial contribution to dealing with climate change and human-rights abuses in the global sphere through the Government of Ireland Official Development Assistance Programme. Texaco is undermining all of that.


“In the face of their inexcusable and catastrophic impact on the planet, fossil fuel companies like Chevron-Texaco are desperate for a ‘social license’ to operate. In Ireland they hope to boost that license by coughing up €130,000 – peanuts to them. Irish sports, famous the world over, are better than that. Don’t take their tainted money.” said Patrick Alley of campaign group Global Witness.

US Attorney Steven Donziger, who helped the Indigenous groups win the multibillion-dollar judgment in Ecuador against Chevron over the massive contamination in the Lago Agrio region, has been fighting on behalf of Indigenous peoples and farmers in the region for more than 25 years. Today, Steven Donziger is under house arrest in New York; a victim of an extraordinary campaign Chevron-Texaco has waged against him in an effort to undermine, discredit and demonize him. Using 60 law firms and 2,000 lawyers, Chevron-Texaco has continued its all-out assault on Donziger in what’s become one of the most bitter and drawn-out cases in the history of environmental law.

On Friday 11th December, 2020, Steven Donziger will make his 500th day under house arrest, a situation condemned by 55 Nobel laureates as “judicial harassment” by Chevron-Texaco.

“Irish sports clubs need to understand that Texaco’s offer of support is intended to greenwash its reputation as a serial polluter and major contributor to global warming. Chevron-Texaco was found by courts in Ecuador to have deliberately dumped 16 billion gallons of cancer-causing toxic oil waste into the rainforest, causing a cancer epidemic that has killed thousands and has decimated five Indigenous nations who are teetering on the brink of extinction. After it was held accountable in court by the communities it devastated, Chevron refused to pay the $9.5 billion judgment and threatened the Indigenous peoples with a ‘lifetime of litigation’ unless they dropped the case. When it comes to respect for the environment, it is being sued in dozens of countries around the world for its irresponsible and harmful environmental practices,” said Steven Donziger, U.S. Attorney.


According to Tom Roche of Just Forests, “Texaco wants to clean up its image and they want sports clubs across Ireland to do it for them by applying for their ‘sports grants’. If Texaco wants to give away its money, I strongly recommend that it start by restoring the many forest ecosystems it has destroyed, compensate the indigenous communities the company has violated and rehabilitate the wildlife. They can get the ball rolling this coming January which is the start of the
United Nations Decade on Ecosystem Restoration 2021-2030.”

About Just Forests: Just Forests was founded in 1989 by Tullamore-native, Tom Roche - forest activist, furniture craftsman and development educator. Just Forests uses societies dependance of forests as the “hook” of engagement by linking local initiatives to global developments. Just Forests is Ireland’s longest established development education (DE) entity dealing with Ireland’s enormous reliance on imported timber from all forest eco-regions of the world and the pros and cons of such international trade.

About Chevron and the Texaco names: Chevron took over Texaco, with a merger that was concluded in 2001, creating the world’s fourth largest listed oil and gas company, which was then called Chevron-Texaco. Chevron later dropped the Texaco name from its parent company name, returning to just Chevron. Prior to the merger, Texaco was the company doing the drilling in Ecuador – a separate company from Chevron - and Steven Donziger’s work to hold the company to account began with Texaco. But post the merger, Chevron assumed the liabilities of Texaco, and so it was Chevron that became the company to hold to account.
About Texaco Support for Sport: Launched in Dublin, on Tuesday, 29th September, 2020, sports clubs were invited to apply for funding from the ‘Texaco Support for Sport’, with a deadline of 31st December 2020

About A Green New Deal for Ireland: Ireland’s proposed Green New Deal, which has been hailed as the country’s “best chance of faster and fairer climate action over the next 5 years” by Friends of the Earth Ireland, would see overall GHG emissions cut by 7% annually on average in the next decade and reach neutrality by 2050. Ireland would also ban the sale of diesel and petrol cars by 2030. Beyond these impressive headline targets, the measures outlined in Our Shared Future would make Ireland a pioneer in adopting ambitious supply-side climate policies that aim to address the root causes of carbon lock-in by keeping coal, oil and gas in the ground. Source: http://priceofoil.org/2020/06/22/irelands-proposed-climate-policy-would-make-it-a-global-leader-in-keeping-fossil-fuels-in-the-ground/

About the Government of Ireland Official Development Assistance Programme: Ireland’s international development programme is an expression of our values as a people. We believe in fairness and solidarity and we understand that humanity is interdependent. Events, policies and decisions in one part of the world can effect lives all over our planet. Source: Irish Aid Report 2019 https://www.irishaid.ie/media/irishaid/publications/Annual-Report-2019.pdf